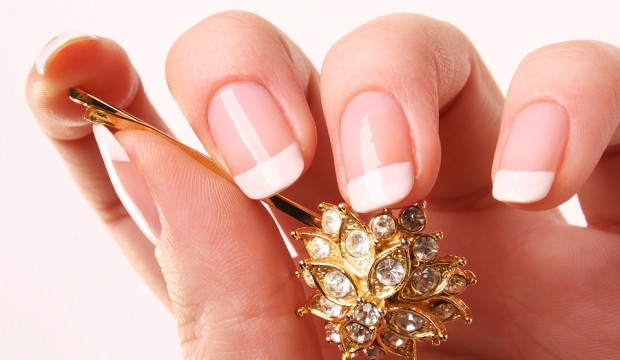 With the infinite variety of colors and treatments available in the nail industry today, there is speculation that the French Manicure has gone by the wayside.  But, even with ever evolving trends, the French Manicure is still a mainstay among women around the world and continues to be the most requested.

The exact origin of the French Manicure is unknown but Jeff Pink, the founder of Orly nail products is credited with the name when he used it on one of his manicure kits in the late 70′s.   Max Factor claims he invented the French Manicure back in the 1930′s for the fashionistas and runways of Paris.  Shortly after, the look was adopted in Hollywood as a chic and classy way to alleviate continual nail color changes on actresses to match their wardrobe.

Even though there is a consensus, particularly among the younger crowd, that the the French Manicure is boring, looks the same on everyone, and should really go away, the clean natural look is still very appealing to women accross the board.   There’s no arguing that it can be worn with blue jeans and sneakers as well as the most elegant wedding gown.

Nail techs are continually coming up with new variations on the old theme providing clients with different colored tips, such as black or glitter, as well as intricate additions of nail art and textures.  Additionally, the French Manicure is the established treatment to camaflouge certain fingernail flaws such as short nailbeds, nail brittleness, and nail discoloration.  Every nail tech should be more than  familier with the application and be able to give their clients a beautiful finished product if they want a thriving business.

If the options and color choices are just too overwhelming, maybe the clean and natural look is the way to go.  There are still those of us who prefer subtleness and understated confidence which the French Manicure continues to exude.  It’s nice to know that chic, elegance, and style has impressive staying power…at least with respect to nail treatments.

Take The Time To Be Sublime